Details come to light after bar patron was assulted.”

In a trial – should the case go to trial – Daniels might ask O’Shei why he did not reveal at Basil’s felony hearing that he had been in the vicinity of the recording equipment, Saraceno said.

An adult film-star charged with stabbing her live-in boyfriend to death is scheduled to go to trial January 6th, 2014. Jennifer Marchant is well known in the Buffalo, New York area for making adult internet videos under the name “Scarlett Rouge.” 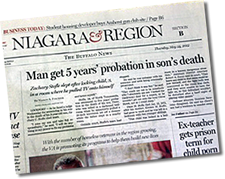 NORTH TONAWANDA, N.Y. (WIVB) - A Niagara County father held back tears as a judge sentenced him for negligence in the death of his 3-year-old son.

Dane Stofle died when a TV fell off a dresser and on top of him at his family's home in North Tonawanda. Prosecutors had charged 24-year-old Zachary Stofle with locking his son in the boy's room, so the father wouldn't be disturbed while he slept. Stofle found the child dead the next morning.

A Niagara Falls man charged with rape was acquitted on all felony charges Monday after a weeklong trial in Niagara County Court. 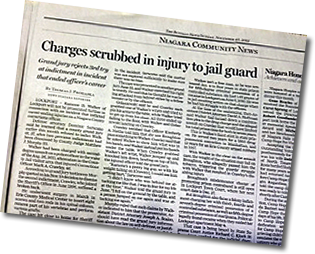 LOCKPORT – Ramone D. Walker of Lockport will not be prosecuted further in connection with an incident that inflicted career-ending injuries on a Niagara County corrections officer.